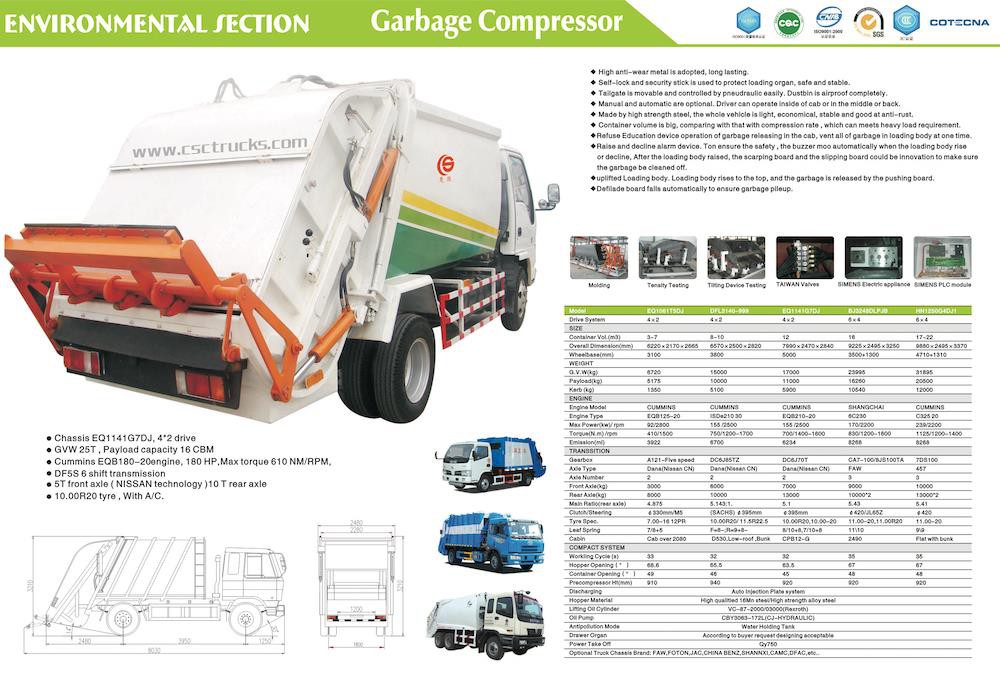 Refuse Compressor Truck have evolved from simple trash-collecting wagons to expensive machines that feature complex technology. Modern CSC Garbage collector come in a number of styles, each designed to collect trash under certain conditions. The mechanical systems and specialty parts of a garbage truck are what allow it to serve this purpose.

At the heart of every CSC Garbage collector are its basic driving elements. These are the parts common to all trucks, including the frame, engine and wheels. Since a CSC Garbage collector is designed to carry heavy loads when full, all of these elements must be heavy duty. Most CSC Garbage collectors feature diesel engines and transmissions that allow for a great deal of low-end torque. This means a limited top speed but better hauling ability and overall durability.

CSC Garbage collector also feature a cab of some sort, in which the driver (and, in some cases, other trash collection workers) can sit while the truck is in motion. The cab contains many of the truck's controls, including all of those used for regular driving, though other controls may be placed on the vehicle's exterior for convenience.

CSC Garbage collector collect trash in a container that usually comprises most of the vehicle's mass, known as the hopper. Hoppers may consist of a single, large open space or a series of compartments for collecting different types of trash. CSC Garbage collector hoppers may also be referred to as compactors in cases where a packer blade is used. The packer blade is used to compress the trash in order to make more space inside the hopper. Packer blades are controlled through a hydraulic system capable of exerting large pressure on the trash. Some modern CSC Garbage collector are able to use their packer blades while driving, so that the trash is compressed between stops leaving room for more to be added. It is the hopper and packer blade that set garbage trucks apart from other types of vehicles or from the multipurpose carts and trucks that preceded the modern garbage truck.

Different varieties of garbage trucks feature specific components that allow them to function in a certain type of trash collection. Rear loaders are the most common type of garbage truck and are used in most neighborhoods to collect the garbage bins left at the street by residents. These CSC Garbage collector feature a rear opening to the hopper and sometimes use a hydraulic lift to raise and dump the trash bins into the hopper. This life is often controlled by a series of buttons and levers that are attached to the exterior of the vehicle and can be operated by a trash collector who is in view of the bins being emptied.

Front loaders are often used to collect waste from dumpsters and serve many large buildings or businesses. These trucks feature a form mechanism that raises and lowers in front of the truck's cab. These forks are designed to fit into corresponding holes on the dumpster and raise it over the trick, actually dumping it into the top of the hopper. The forks on a front loader are usually controlled by a joystick located inside the cab.

Other Types of CSC Garbage collector

Another type of CSC Garbage collector is the side loader, which, as the name implies, feature a hopper that can be accessed through one or more doors on the side of the CSC Garbage collector. Recycling trucks, which may include multiple hoppers for different types of pre-sorted waste, are often built in the side loader configuration. Side loaders may include an automatic lift mechanism, like a rear loader, or forks like a front loader.

Still another type is the suction truck, which features a pneumatic tube that acts like a large vacuum cleaner to suck waste out of specially designed containers.

Because of its need to be so powerful, the packer blade is the most dangerous part of a CSC Garbage collector . Trash collector is routinely listed among the most dangerous occupations, and this is the reason why. Although most CSC Garbage collector come with a series of safety features , and waste management companies require their workers to follow procedures designed to protect their own well-being, accidents resulting in death or dismemberment can result if a worker is caught inside the garbage truck's hopper when the packing blade is actuated. These sort of accidents can be the result of negligence or mechanical error. In some documented cases, homeless people sleeping in dumpsters have been poured into a truck's hopper. Other times, workers are injured while trying to dislodge objects that may become jammed in the truck's packer blade.