How to Protect Aerial Truck Hydraulic System from Pollution

According to the survey statistics, hydraulic, mechanical failure, 20% of the hydraulic system for aerial lift, hydraulic system that at least 75% of the fault is due to hydraulic pressure caused by unclean. Aerial boom lift Hydraulic system is an important high-altitude operation truck part and takes a job and lifting operations when the outrigger cylinder, cylinder amplitude is a major force component, in order to support aerial lift bucket as well as lifting heavy machine full load. Aerial platform truck bodies job control and both rely on hydraulic system. 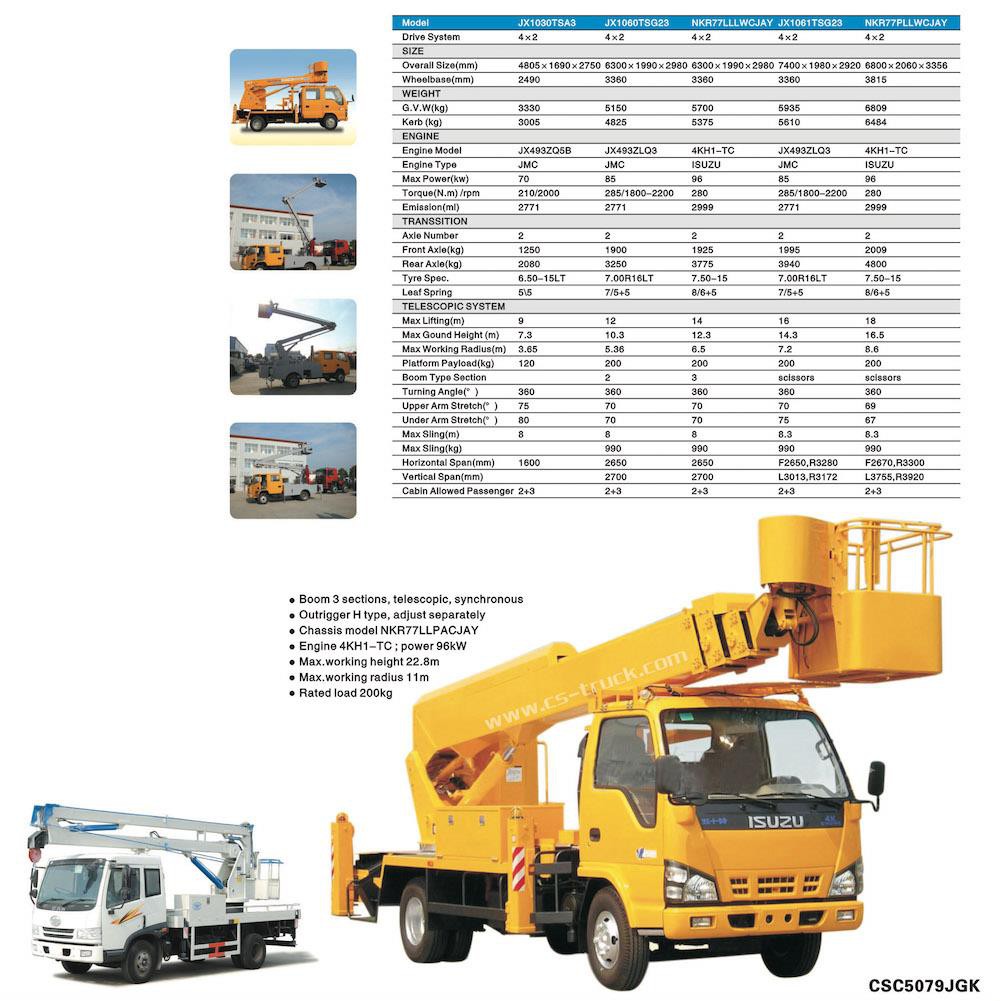 Aerial lift bucket trucks in the early emergence control components caused by tiny particles choked and can not be ignored. Experimental replacement of a number of specialized factories down the demolition of a number of motor seized analysis showed that the blockage due to contaminants while the failure of internal control over the oil port of the motor 56% of the total. Sold over the years from a high-altitude operation vehicle spot checks found that the prevalence of acute pollution of the hydraulic system, working there emulsified oil, coke, 20m below the solid particles countless, far exceeding the standard.

The mechanism of pollutants harm the system 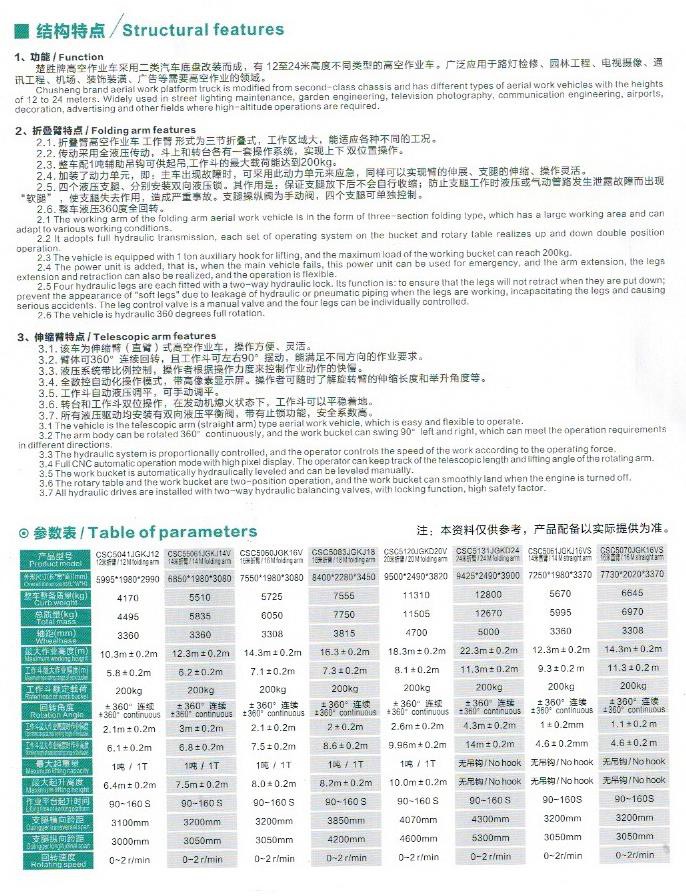 Telescopic boom bucket truck valve components, and its co-moving pair gap is generally 8-20m, when the dirt particles into the gap between the movements, it will scratch the surface, increasing wear and tear, so that the expansion gap, or blockage of orifices, damping holes, caused by vibration or movement failure even spool choked to death. If dirt particles stuck in the leg hydraulic cylinder lock, the lock failure will cause roll-over accident. For the pump components, the pollution particles cause sliding parts, such as the gear pump gears and front and rear end caps face, tooth roof and shell, the plunger and the cylinder piston pump hole, cylinder, and with oil pan and other wear and tear increased efficiency, lower heat and even burn, greatly shorten the pump life.

For the hydraulic cylinder, pollution particles will accelerate seal wear, so that leakage increased, resulting in power dissipation. Particles so that the piston rod cylinder or injury is often scrapped happen.

Japan Construction Mechanization Association, made an interesting experiment, the working oil is equal to about 0.005% of the sand (size of not more than 5 ~ 15&mu;m), in three installments within the oil gradually to work, only turning 50 h, with no Dust rotation of more than 1000 h the same wear and tear.

The hazards of air: Pollutants in the discussion, when the air is often ignored. Actually shows that in the hydraulic system, air is also a pollutant. In the assembly of certain products or repair of replacement of the system components, because the exhaust is not sufficient, resulting in a large number of air into the hydraulic system. Debugging of high-altitude operation truck, sometimes there leg, lower arm and upper arm cylinder tanks can not move, the reason is to pump out the pipe before the one-way valve as the air inside the tubes to make a one-way valve can not produce back-pressure Open. In particular, a larger volume of air into the tank, so that aerial vehicles in operation during the tank produce whistle, vibration, and crawl. The so-called crawling refers to the system to make working parts of the movement, the air inside the fuel tank has been absorbed, the air is gradually compressed, and when the pressure is sufficient to overcome the working parts of the maximum static friction movement, the movement was once again re-emerged. Working parts of this pulse-like movement known as the hydraulic system oil circuit design can also cause unreasonable air in large numbers into the system.

Its telescopic boom cylinder rod cavity directly into the system way back to the same pipe, A side of the pressure to zero. In the driving state, cylinder rod chamber is usually full of oil-free air. If the return pipe submerged in oil, there is the regular rod cavity full of oil-free air in the state, which created the conditions for channeling arms. Results show that: as long as the tanks are in a two-cavity filled with oil (or only a small amount of air) of the state, channeling arms would not have happened, even at high speed brake, telescopic boom will not sprang.

Other pollutants: Fibers, paint flakes, often resulting film damping with throttle hole or holes of the component failure due to telescopic platform blockage. The work of oil mixed with water and other incompatible fluid, temperature, pressure and chemical changes in the role, will continue corrosion of metal, so that oil deterioration, promote bacterial growth, resulting in oil emulsion scrapped.

Design Stage: bucket truck in use, the invasion of contaminants and generate the control and elimination of pollutants, depending on the design of advanced and reasonable. Pollutants generated by the manufacturing process and design work bears a closer relationship, the thoughtful design of the hydraulic system of pollution control are extremely important.

From the hydraulic oil filter to remove solid contaminants in the most effective way is the key to pollution control. Hydraulic oil filter system configuration must meet three objectives: to prevent the chips or other components caused by pollution particles stuck, scratches, blockage of the accident damage to provide a protective filter; the hydraulic oil pollution control system components can tolerate the level of on; to provide anti-abrasion protection. To this end, in the pump oil absorption mouth, an important component of the inlet, and the working oil flowing back into the tank where the oil filter are installed in different accuracy. In addition to ensuring oil filter differential pressure system to increase the features and do not give too much pressure loss of the circumstances, the selection of high-precision oil filter allows the system to maintain at a high level of cleanliness. Optional oil filter must have a reliable, durable, long life, and have instructed device, easy to clean and so on. Hydraulic lift, hybrid boom truck, 4*4 bucket truck, bucket trucks for tree work, cheap bucket truck, aerial bucket trucks.

As far as possible pipe manufacturing hydraulic tubing, steel has a high pressure, deformation is small, corrosion-resistant, the assembly is not easy bending, low price advantage. In the rubber tubing connections must be used, such as the relative motion between the components of the pipeline to connect its sealing components and systems must be matched with the hydraulic oil to prevent the formation of the internal sources of pollution. Forestry bucket trucks bucket boom truck, international bucket truck dealers

Aerial vehicle commonly used mineral-based hydraulic oil is. There is a better match with nitride rubber, neoprene rubber, polyurethane rubber, fluorine rubber. When the choice of rubber varieties, but also a concrete analysis of hydraulic oil components, towable aerial lift aerial platform aerial platform aerial work platform aerial lift bucket trucks. Such as chloroprene rubber, this is a very good oil resistance rubber kinds, but it is a low aniline point (80 ℃) swelling of the mineral oil to soften not suitable for use; polyurethane rubber, oil resistance, wear resistance is higher than the pressure of nitride rubber, but poor heat resistance, easy hydrolysis. When the oil mixed with a small amount of water, the working temperature is over 50 ℃ hydrolysis took place cannot be used.

Tank air, dust, water, main channel into the system, designed to take effective preventive measures. Tank wall with spray can prevent patent leather, rust on the hydraulic system contamination. Oil tank design should not only consider the cooling effect, at the same time give full play to its deposition of solid contaminants and decontamination capabilities.

At the manufacturing stage: All components, piping process is completed in each province must be carefully cleaned to remove all manufacturing contaminants. Component assembly and system assembly of the environment must be clean. System assembly is completed, prior to the commissioning procedures should be strictly in accordance with the implementation of the entire hydraulic system flush to remove contaminants in the assembly process.

Hydraulic oil into the hydraulic machinery manufacturer, after a more intermediate links, often fail to 19/15 provision levels, should make the new oil filter, sedimentation and management.