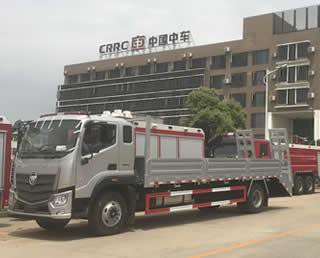 CSCTRUCK will continue to export FOTON commissioned variety models of special trucks, since 2014 FOTON commissioned CSCTRUCK first time to produce and export 300 fire engines to Laos after this is the other batch of special vehicles, once again proved the strength of our factory’s design and productivity. Today, with the launch and widespread acceptance of China's "Belt and Road" initiative and capacity cooperation policy, more and more Chinese enterprises are increasing their foreign investment cooperation, exporting technology and management experience, and promoting the development of many developing countries. Fukuda Automotive, as the representative of China's equipment manufacturing enterprises, is further integrated into the new wave of globalization. Currently, FOTON's export markets are concentrated in Vietnam, the Philippines, Myanmar, Iran, Chile and Bolivia, accounting for about 60%. From the perspective of terrain these countries are located in Southeast Asia, Central and South America, and North And Asia.

In 2016, Foton Motor, together with Daimler, Cummins, ZF and other top global supply chain partners, integrated the world's leading technology resources, the launch of the first batch of Internet super truck products, not only for export countries to bring high-quality logistics and transportation carriers, but also to make the world people realize "high-tech", "high-value" "Made in China." According to Foton's "2020 Plan", Foton Super Truck will gradually penetrate into the domestic transportation sector, and go to the world in sync. In 2017, CSCTRUCK, on the basis of consolidating its original share of overseas markets, carried out the promotion of the whole value chain through product line expansion, sales network development, manufacturing, service, accessories, etc., and opened up access to Southeast Asia, West Asia, North Africa, Central and Eastern Europe, Africa, Central and South America, and formed The West Asia, North East Asia, Central and South American core market, at the same time to achieve South Korea, Australia, Turkey and other developed markets to enter.