BMC Comparable To European Trucks, Why Not As Influential As Japanese And Korean Trucks?

The author previously wrote an article about the Turkish Pi Makina 18-440 truck. In order to give readers a more comprehensive understanding of the Turkish truck industry, today I will introduce another influential Turkish truck-BMC TUGRA.

This truck is higher than Pi Makina 18-440 in terms of workmanship and product strength, and can represent the highest level of Turkish heavy trucks. Not much gossip, let's take a closer look at the level of this truck, and also discuss some of the Turkish truck industry. What is sacred Turkey BMC company? In 2019, it has just won hundreds of millions of dollars in tank orders from the Turkish Army. The model that is familiar to Chinese truck fans is the BMC TUGRA truck that was unveiled at the German IAA auto show in 2018, which is the protagonist we are going to introduce today. The most impressive thing about the BMC TUGRA truck is the huge air intake grille on the front face. A previous article from the card family introduced that the general comments of card friends are not coordinated, and the headlights are a bit evil. This author of different opinions does not comment too much. 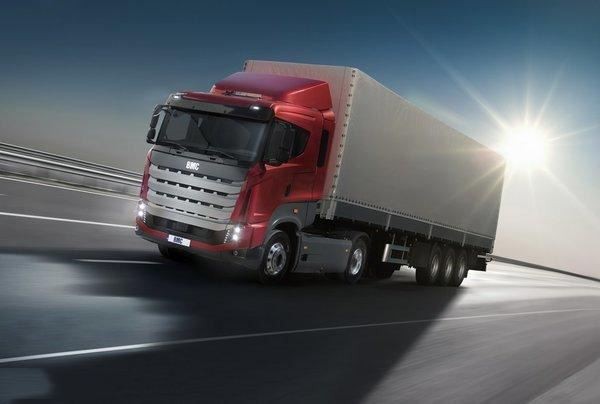 However, I think the shape of the BMC TUGRA truck looks familiar, so I found a picture of Hyundai Chuanghu heavy truck. A comparison shows that the two do look very similar, such as the same huge air intake grille, handlebars, window and rear window shapes, and the transitional waistline of the side face.

I checked the styling and interior design of the BMC TUGRA truck by a company named DesignUM in Istanbul, while the styling of Hyundai Chuanghu is rumored to be designed by a German company. I don't know if there is any connection between the two, after all, this kind of face collision is a small probability event. The interior of the BMC TUGRA truck is more original, but the steering wheel is too similar to the Toyota Prado. In addition, the overall shape of the workbench and the penetrating instrument panel can vaguely see the shadow of the Volvo FH heavy truck interior.

In the overall color matching, the black with gray has obvious layering, which gives people a sense of simplicity, and is also very resistant to dirt, which meets the use environment of the truck. Although the piano paint is used on a large area of the workbench to improve the texture, it is easy to leave fingerprints and front The dirt-resistance properties mentioned are contrary, and I personally think that it would be better to change to a matte panel.

(Fingerprints on the piano paint panel)

The flat floor design of the cab guarantees the internal activity space of the driver, and the width of the sleeper (80MM) has also reached the standard of mainstream Ouka. Other humanized designs such as sleeper control panels, roof sunroofs, and upper sleeper crawling ladders are all very European.

It can be said that the interior design of the BMC TUGRA truck is not much different from that of Oka. The only thing that needs to be considered is the workmanship and materials. The maximum horsepower is 460 horsepower (maximum torque 2150N.M), with ZF 12-speed automatic transmission and 16-speed manual transmission optional. The 13-ton drive axle has a speed ratio of 3.081, and the car is equipped with two fuel tanks (one 600L, one 80L) on the left and right sides. Considering the area of Turkey, the battery life should not be a big problem. In terms of technology configuration, there are mainstream configurations such as cruise control, tire pressure monitoring, full LCD instrument panel, lane departure warning system, and body stabilization system, which basically follow the trend of Oka. These are on par with its main competitor, Ford Fmax, in Turkey.

What is the strength of the Turkish truck industry?

The Turkish automobile industry is deeply influenced by Europe and the United States. For example, the Ford truck, which has been deeply plowing in Turkey, has a profound impact on Turkey. After in-depth understanding of the two heavy trucks produced by Turkey "independently", the author has a preliminary impression of the strength of Turkey's truck industry.

Compared to more developed countries such as Australia and New Zealand, Turkey is very aspiring. Its automobile industry is relatively mature and developed. It not only has its own commercial vehicle brand, but also exports foreign exchange; thanks to the help of European and American car companies, Turkish trucks have developed rapidly in recent years. At the same time, the influence of Volvo and Scania truck brands in Turkey (many international routes will choose these European brands), so that Turkish truck users have high quality requirements.

Therefore, the contradiction is that Turkish truck companies have the motivation to pursue high-quality, and they can also obtain the help of advanced European and American companies more conveniently. However, the truck industry itself is weak, and self-owned brand trucks cannot meet the needs of domestic users .

High-level models like the BMC TUGRA truck can be manufactured in Turkey, and the three core parts and electronic components with many technological configurations must be imported. Even if the styling and interior can be designed in the country, traces of imitation are still visible, which reveals the true strength of the Turkish truck industry. You can understand that Turkey has the ability to assemble a good truck, but the core hematopoietic ability and sustainable development ability are missing. Most of the important parts are purchased out, which brings a fatal disadvantage to Turkish trucks that the price is not high, and the prices are basically rushed to Oka.

The price is close to that of Oka, but the brand, tuning, and vehicle quality are weaker than Oka. Turkish trucks have no advantage in the competition with Oka. More importantly, the lack of cost-effectiveness has directly led to the narrowing of Turkish trucks' foreign expansion. In the international arena, Chinese trucks are not cheaper than Japanese and Korean trucks. Therefore, Turkish trucks are basically still playing in their own country. Reliance on foreign parties, lack of scale, and weaker design capabilities have restricted the development of Turkish trucks.

We can see from Turkish trucks that integrating international high-quality resources can quickly build good cars, but the lack of autonomy can only be regarded as vain. The inspiration for Chinese trucks is that international cooperation and independent innovation are indispensable. (Text/Surname Number: Little K)