The Fascinating History Of The Garbage Truck

The garbage truck celebrates its 100th anniversary this year. The garbage truck has a fascinating history that is often overlooked, or so people in the waste-hauling industry say. But there is a reason garbage trucks look the way they do, and they were revolutionized by a man who was a politician, businessman and inventor. According to this history, garbage trucks began with horses pulling cars of stuff around. Then came modified versions of things like Ford Model Ts, which had only been around since 1908. These were way better than horses, but they were still little more than people throwing trash into the back of a Ford pickup truck, itself a pretty primitive, though effective, concept.

The idea of an enclosed trash truck, so things wouldn't fly out at speed, was started in Europe in the 1920s. It's actually kind of amazing it took someone that long to think of that, but anyway. The Americans thought of the waste hauler we're more familiar with today, the external hopper truck. Thus, in 1935, the Dempster-Dumpster was born. Mouthful-of-a-name-aside, this dumpster was a container on a lift for workers to put waste in and then have it loaded into the covered part of the garbage truck. The front-loading dumpster fitted to garbage trucks to this day lowers from the top to the ground level where garbage is scooped up. This cut the amount of labor needed to haul stuff by 75 percent and the order books filled up. The website Classic Refuse Trucks (bet you didn't know that was a thing, did you?) has a ton of photos of old-school dump trucks, some of which are pretty amazing. 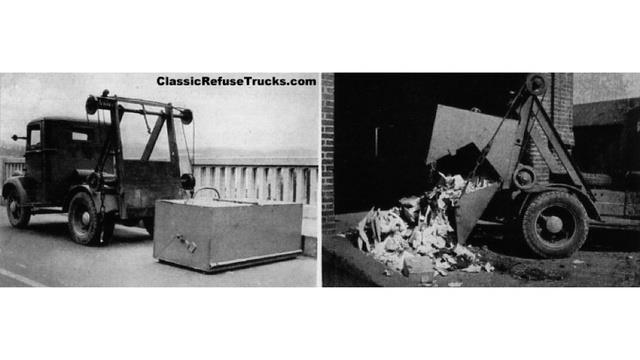 Along the way, there have been side-loading trucks, ones with vacuums and lots of other variations on a theme. But none have surpassed the truck fitted with the Dempster-Dumpster because it's such a simple, but effective, idea. It's a device that's been adopted by just about every country, too. It is also where the term dumpster comes from, so there you go.

Dempster's career went on to politics where he was mayor of Knoxville for 18 years, but he's best-known in the hauling business for his revolutionary invention.

Do you have any experience with these trucks, or great garbage truck memories?

Where Does Garbage Go
Zhongzhen Sign Reorganization Cooperation With Tianhui