After turned positive in July, the Heavy Truck Market continued to grow in August. The tractor segment, which has been growing for several months in 2019, also continued to grow in November, growing by 16%, continuing to outperform the overall growth of the heavy-duty market of 14%. It is reported that, in November 2019, China's heavy truck market sold 101,600 vehicles, up 11% month-on-month and 14% year-over-year, unchanged from the previous month. As the top priority of the heavy truck market, the tractor market also continued to grow, with sales of 55,000 units delivered in November, up 19% month-on-month and up 16% year-on-year. So far, the tractor market has grown for 10 consecutive months after a downturn in the first month of 2019, with November sales growth narrowing from the previous month (October sales increased 19% year-over-year). Looking at the trend chart of tractor sales and growth in November in recent years, the tractor market began to recover in 2016, with tractor sales up 157% YoY in November and 49% in January-November; This downward trend continues into 2018.

In 2018, the tractor market fell for 10 months, only to regain growth in November, driven by overdrafts and low road freight. Entering 2019, the tractor market has grown for 10 consecutive months after suffering a downturn in January, with cumulative sales up 16% in January-November 2019.

Six of the nine companies that achieved growth achieved double-digit growth, the largest increase being IVECO Hongyan with sales up 306% year-on-year in November, while Futon, ranked 5th, also surged 40 percent, and Futon also had the highest growth among the top five companies. 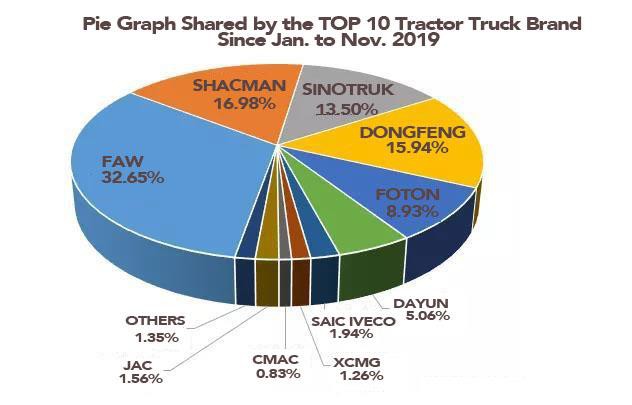 From the cumulative sales data, in January-November 2019, the tractor market achieved sales of 518.7 thousand units, a cumulative increase of 16% YoY, more than the sales from January to November in 2018, specific to the top 10 enterprises to see 9 increase 1 decline. Dongfeng, SINOTRUK and IVECO Hongyan achieve the increase more than 20%, The highest increase was IVECO Hongyan for about 59%.

CAMC suffered a great decline in sales in the top 10 companies, with cumulative sales down 6% year-on-year in January-November.